Better known as the mermaid of the Mediterranean,

Alexandria is the second largest city in Egypt and the chief

Port of Egypt located on the edge of the Nile delta on Mediterranean Sea.

Alexandria characterized by its blue sky and wonderful beaches,

Alexandria’s people are friendly and they are excellent in welcoming people.

Founded by Alexander the Great in 332 B.S, Alexandria became home to one of

Seven Wonders of the Ancient World, the Lighthouse of Alexandria, as well as the

Alexandria has a great and interest history from ancient roman to these days,

Alexandria is one of the most intriguing of history’s most notable cities, many old

Australian no deposit casino bonus offers on this website. Some of the best Aussie

Bonuses where you can play for free with 200 no deposit free spins. 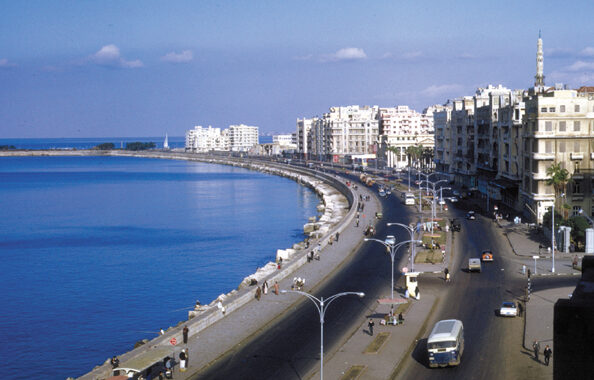 Of the Greatest military geniuses of all times,

He was inspiration for later conquerors such as Hannibal the Carthaginian,

The Romans Pompey and Caesar, and Napoleon.

Alexander was born in 356 BC in Pella, the ancient capital of Macedonia;

He was son of Philip II,

King of Macedonia, and Olympia’s, the princess of neighboring Epirus.

Nobody knows the cause of Alexander’s death.

Some people have said his death was caused by poison in wine, murder

Or a fever after a Battle.

Alexandria, named after Alexander the Great, was founded in the year 332 BC. 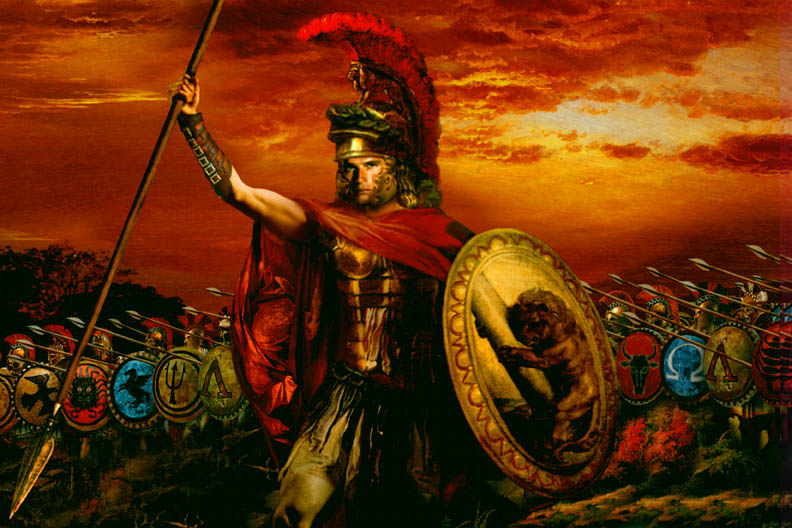 Only 5 mins from Cherry maryski Hotel, mosque of Abu al-Abbas al-Mursi is the most important historic

Constructed in 1775, it was built over the tomb of saint Ahmed Abu al-Abbas al-Mursi.

which remains today on its original site. The mosque became a place of pilgrimage for Muslims from

Egypt and Morocco who passes through Alexandria during their Haj journey to and from Mecca.

The walls of the mosque stand 23 meters high and dressed in artificial stone while the minaret,

situated on the southern side, rises to 73 meters. 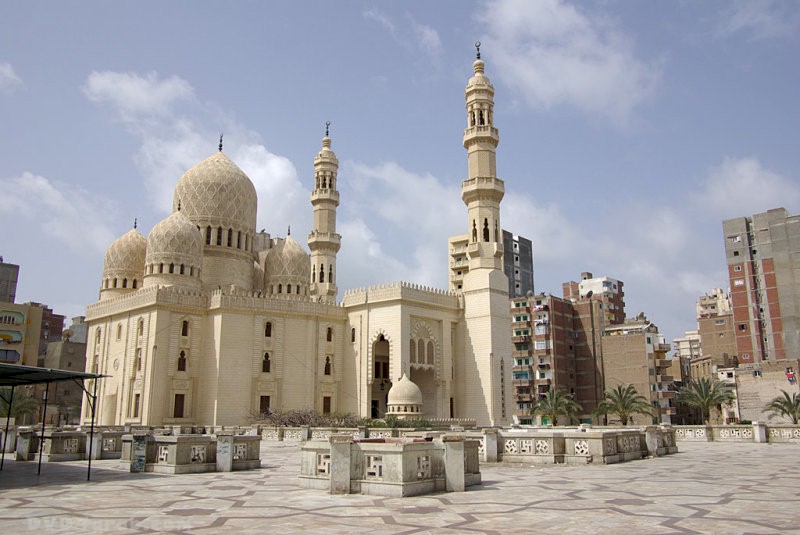 Pompey is a column of the most famous monuments in Alexandria,

and made of red granite stone.

Held in honor of Emperor Diocletian in the third century AD.

Its body column is a one piece diameter

the overall height of the column including

the rule about 26.85 meters. In the west side of the column bases

can be reached peace underground. 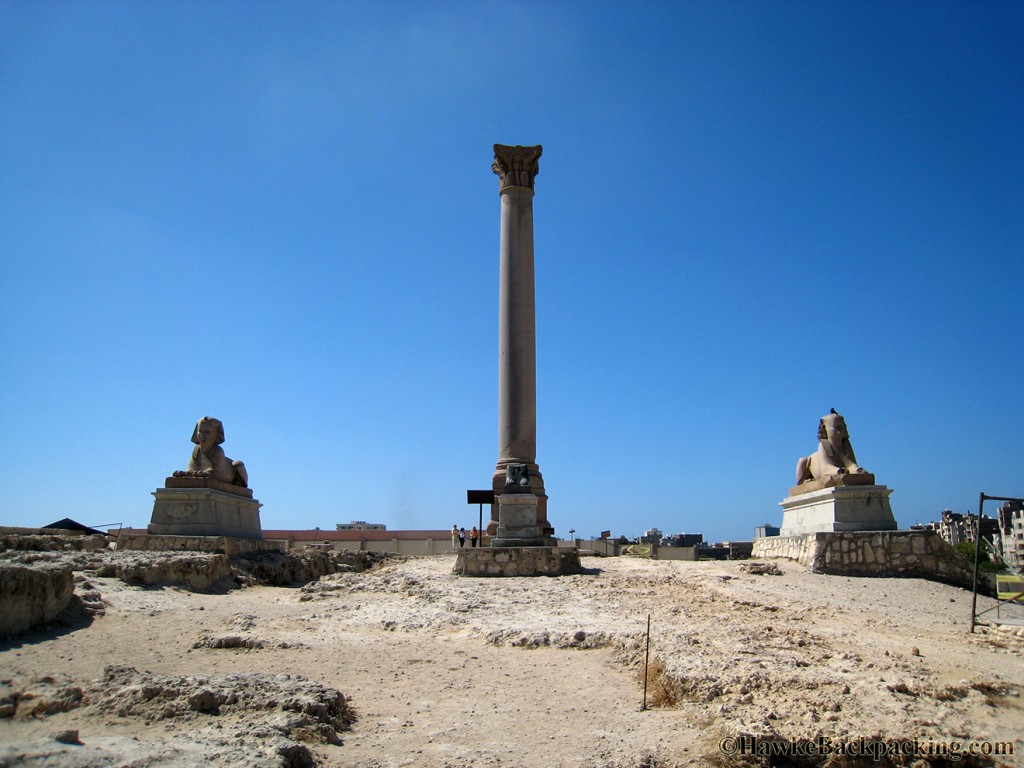 was probably the largest and certainly the most famous

of libraries of the ancient world. It flourished under the patronage

of the Ptolemaic and functioned as a major center of scholarship,

at least until the time of Rome’s conquest of Egypt.

The Greek term bibliotheca, it’s terminology was collection of books,

it’s called not any building nor the social networks

which sustained and operated the collection,

which complicates tracking the history of its destructions.

The bibliotheca Alexandria was inaugurated in 2002

near the site of the old library. 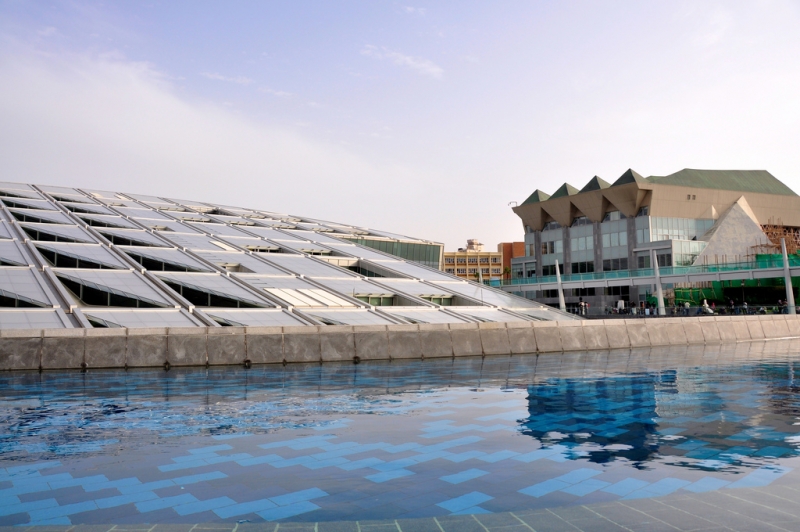 Every town in ancient Rome had an Amphitheatre, which means,

“double theatre”. They were grand and impressive,

shaped in a half circle, open to the sky,

in ancient Alexandria; in the Roman theatre on a hot afternoon,

are wild beasts, driven in through the tall doorway,

and the fighters coming in from all around the floor.

The Roman theater is located in the modern area of “Kom El-Dikaa”,

which is almost in the center of the city of Alexandria.

Dating from the 2nd century A.D it has a large auditorium,

about 42m in diameter. In later times the theater was rebuilt

and its auditorium was diminished to 33.5 m in diameter,

and then counted 16 rows of marble seats.

Two marble pedestals and the bases of the columns are preserved. 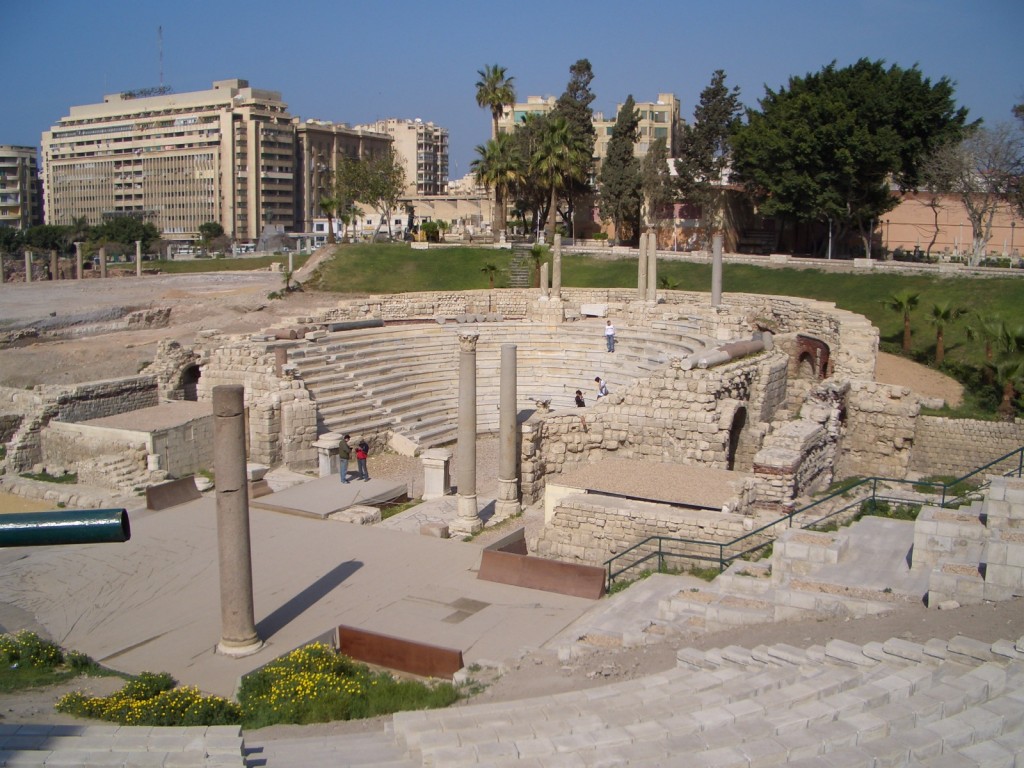 In the medieval times, these catacombs

were considered among the Seven Wonders of the World.

The Greek-Roman architecture of the catacombs is very complicated,

so the structure of the main shaft is ingenious, as it allows the light to enter inside.

Throughout the years, the subterraneous waters entered inside,

today being necessary for visitors to walk on wooden boards

on certain areas so as not to step through water.

In these catacombs there are Roman details, blending with Egyptian and Greek ones,

due to the period when they were built. According to tradition,

in catacombs there is a funerary room used to bury people and animals,

killed at the order of the Emperor Caracalla, this room being called Caracalla’s Hall.

of Osiris and Persephone’s kidnapping by Hades,

a mixture of the Greek and Egyptian funerary myths. 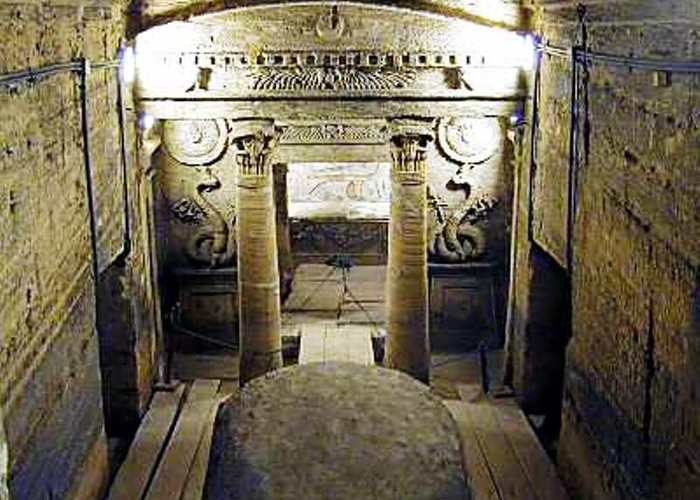 The Qaitbay Citadel in Alexandria is considered one of the

most important defensive strongholds, not only in Egypt,

but also along the Mediterranean Sea coast. The Citadel is

of the Pharos Island in front of a special view of the blue sea.

It was built on the site of the famous Lighthouse of Alexandria,

which was one of the Seven Wonders of the Ancient World.

Restoration began in the period of Ahmed Ibn Tulun (about 880 A.D).

the place against the Turks, who were threatening

Egypt at that time. The Citadel continued to function

during most of the Mameluke period, the Ottoman period and

the Modern period. The founder of the Citadel of Qaitbay

He was a Mamluke who had come to

Egypt as a young man, less than 20 years old. He was one of the most

important and prominent Mameluke Sultans, ruling for about 29 years. 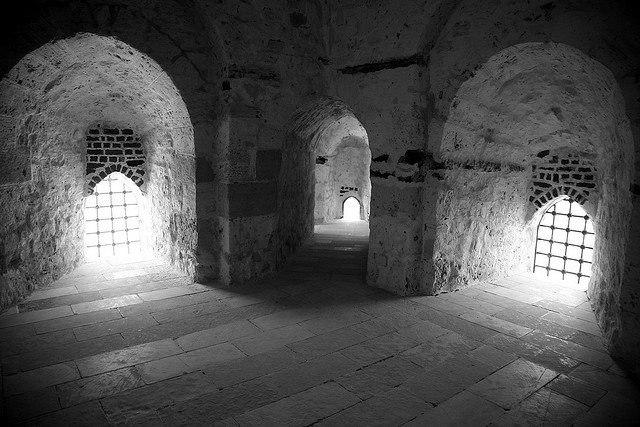 Montaza is a place with fantastic gardens and wonderful beaches to walk around.

along the Corniche is where many of the modern Alexandrian hotels are located,

as well as one of the elegant heritage hotels. Montaza Palace, which gives the park its name,

was constructed during the reign of the KhediveAbbas II, 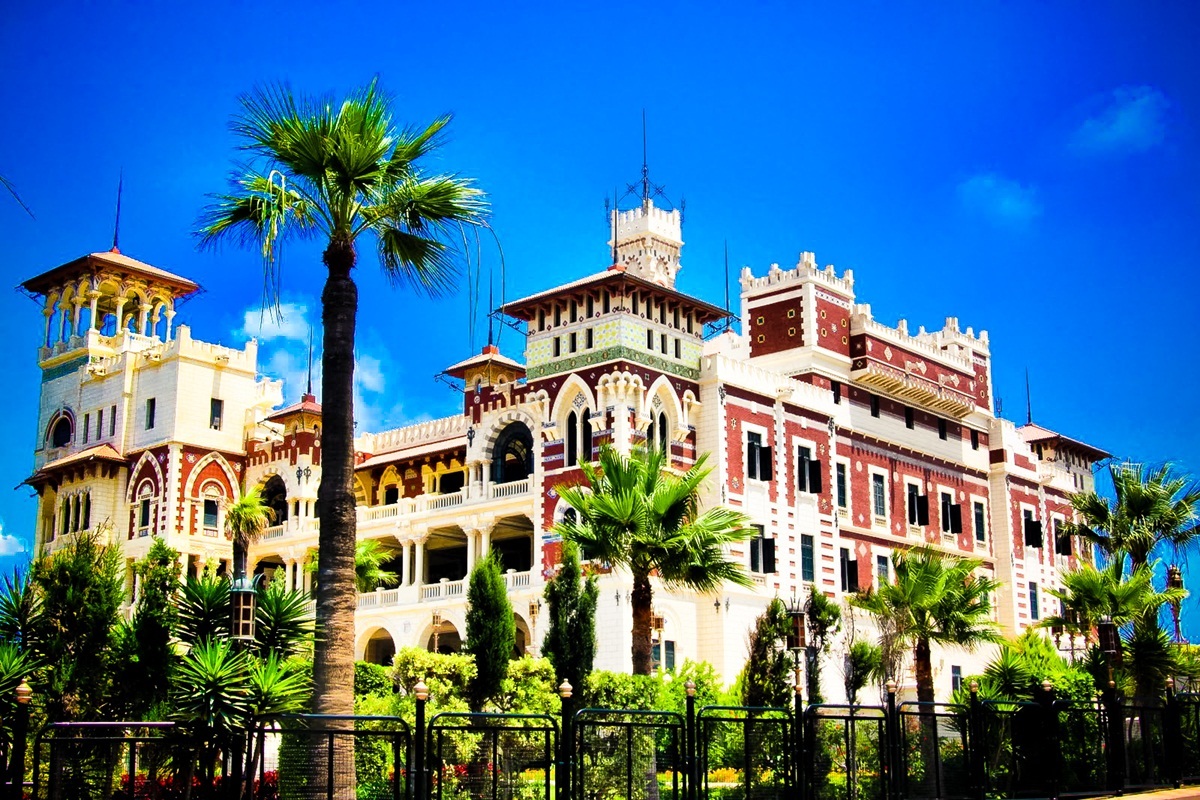 What is really magically about the Alexandrian heritage is that it is not limited to what has existed,

or what you can still see existing on land, but it extends beyond that to

what you can’t see of valuable archeological remains,

submerged under water at several sites along the coast.

At the site of the Eastern Harbor, submerged ruins of the ancient Lighthouse of Alexandria,

These pieces were found scattered over an area of 2.5 hectares of the Harbor’s bottom,

including hundreds of columns of all sizes, column bases and capitals, sphinxes, statues,

and some huge blocks of granite which, given where they lie,

certainly came from the famous lighthouse. Several sculptures belonging to the pharaonic era,

including 28 sphinxes, bearing the insignia of the Pharaohs Sesostris III,

Sethi I, Ramses II , and others, as  well as obelisks with hieroglyphic inscriptions,

were also found at the underwater site of the Eastern Harbor sildenafil generique.